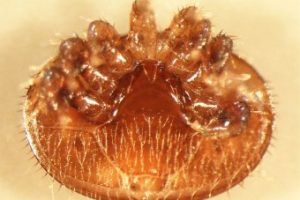 In European honey bee subspecies usually 5-20% of the Varroa mites remain infertile after invading worker brood cells (see review by Rosenkranz et al., 2010). In addition, some mites show a delayed egg laying in relation to the brood development or have only male offspring due to unfertilized eggs. These occurrences limit the reproductive success of Varroa which can be measured as the number of adult daughters per foundress mite at the moment of brood emergence. In the 1990s, Harbo and Harris identified high levels of non-reproduction as an inherited character of worker bees which they named “Suppression of mite reproduction – SMR”. Later on, specific experiments suggested that the low proportion of fertile mites, at least in the US stock, mostly was due to preferential removal of reproducing mites by worker bees, so the trait was renamed “Varroa sensitive hygiene – VSH”. However, SMR in a colony can potentially result from mechanisms other than VSH behavior (there is evidence that brood may be able to prevent mite reproduction). One of the potential mechanisms is uncapping and recapping of (infested) brood cells. At the right time of brood development, opening of infested cell for some time can have a negative impact on success of mite reproduction (Kirrane et al., 2011). High levels of mite resistance were achieved by strong selection for SMR. Increased
proportions of non-reproducing mites (40 – 50 %) have also been shown as a significant trait of some naturally selected mite resistant A. mellifera populations in Europe ((Locke et al., 2012). Novel research on surviving populations indicate that recapping plays a very important role in resistance. However, we don´t have much information about the distribution of the SMR trait in different European subspecies and its variability due to seasonal and environmental effects. Therefore, RNSBB partner institutes are running a joint investigation to gain more information on the variability of the rate of non-reproducing mites in different European honey bee populations and in different locations.[/read]