An international experiment to estimate the importance of genotype-environment interactions on vitality and performance of honey bees and colony losses was run between 2009 and 2012.

The experiment included 621 colonies from 16 different genetic origins belonging to 5 Apis mellifera subspecies (carnica, ligustica, macedonica, mellifera, siciliana). It took place in 21 beeyards, managed by 15 partners in 11 European countries, ranging from Scandinavia to the Mediterranean across Central Europe and the Balkans. 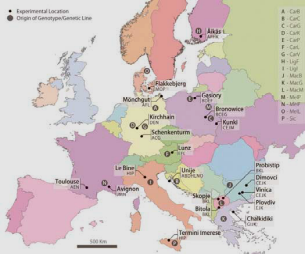 At each location, the local strain of bees was tested together with at least two “foreign” origins. The common test protocol (Costa et al., 2012) took into account colony survival and development, productive and behavioural traits and presence and prevalence of pests and pathogens. No chemical treatments against Varroa or other diseases were applied during the experiment.

Data collection was performed according to uniform methods which were developed and constantly discussed during regular meetings and training sessions in a productive and friendly atmosphere. Throughout the experiment partners were frequently in contact for exchange of opinions and for local adaptation of the management techniques.

Our results show that it is extremely important to continue work towards conservation of locally adapted honey bee populations. Local bees were showed to live longer, develop bigger colonies and to be tendentially more productive and less aggressive. The complete results are collected in a 2014 Special Issue of the Journal of Apicultural Research (Vol. 53, Issue 2) on Genotype-Environment Interactions. The articles are open access thanks to funding by Ricola Foundation via COLOSS, thus can be freely downloaded here.