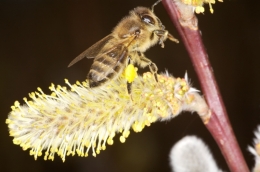 Honey bees with roots in the local environment manage much better in the struggle for survival than imported honey bees from foreign environments.

A world without bees would be a whole lot poorer – literally. In Denmark alone an additional 600 million to 1 billion Danish kroner are earned annually due to the work done by bees making honey and pollinating a wide range of crops from apples to cherries and clover.

Unfortunately, bees all over the world are under pressure from pesticides, mites, viruses, bacteria, fungi and environmental changes, among other things. The problems often lead to the syndrome Colony Collapse Disorder, which can cause whole bee colonies to fall apart.

Scientists from, among others, Aarhus University, have now found that bees that are adapted to the local environment fare much better with regard to meeting the challenges than bees that have been purchased and imported from a completely different home area. The scientists determined this by investigating the interaction between the genetic makeup of honey bees and their environment. Even though quite a lot is known about the geographical and genetic diversity of honey bees, knowledge of how honey bees adapt to the local environment has been limited until now.

– Many beekeepers believe that it is best to buy queens from outside instead of using the queens they have in their own beehives. However, there is increasing evidence that the global honey bee trade has detrimental effects, including the spread of new diseases and pests, says senior scientist Per Kryger from the Department of Agroecology at Aarhus University.

Productivity in beehives is typically measured by how much honey the bees produce. The desire to maximise earnings by importing bees changes the natural genetic diversity. The question is whether commercial honey bee strains are actually more productive, all things considered. There is not much point in having a highly productive strain if it succumbs to Colony Collapse Disorder.

The studies were carried out in 621 colonies of honey bees with 16 different genetic origins. The beehives were set up in 11 countries in Europe. There was one local strain and two foreign strains of honey bees at each of the locations.

– It is very clear that the local bees fare better than imported ones and that they live longer. It is not possible to point at one single factor that gives the local bees the advantage, but it appears to be an interaction between several factors, says Per Kryger and continues:

– Our results indicate that the way forward is to strengthen the breeding programmes with local honey bees instead of imported queens. That would help maintain the bee population’s natural diversity. It would also contribute to preventing the collapse of bee colonies, optimise sustainable productivity, and make it possible to maintain continual adaptation to environmental changes.